As millions continue to shelter in place, many Americans are finding refuge and solace in a classic pastime with a history of popularity during challenging times.

Over the course of this devastating pandemic, Americans have dramatically changed their lifestyles and collectively adapted in countless ways. Meetings at the office shifted to virtual zoom meetings and daily commutes went from hopping on the subway to shuffling over to a makeshift desk in the living room. Social lives changed in unforeseen ways, too. Dining out in restaurants and going to the movies became a thing of the past and sporting events came to a screeching halt.

With strict lockdown orders and social distancing measures in place, people were left to find ways to pass the time indoors. Some mastered the art of baking banana bread, others learned choreographed TikTok dances and many found comfort in good old-fashioned jigsaw puzzles. As it turns out, there’s real catharsis in reassembling a picture from irregularly shaped interlocking pieces and in challenging economic times, it’s not unusual for Americans to find refuge–and perhaps a healthy dose of distraction–in puzzles and board games. In addition to providing a respite from technology and the often apocalyptic news cycle, solving puzzles can help curb anxiety, sharpen cognitive abilities, and provide a meditative outlet for collaborative problem solving. For good reason, this humble form of entertainment has been around for centuries.

It’s not unusual for Americans to find refuge–and perhaps a healthy dose of distraction–in puzzles and board games. 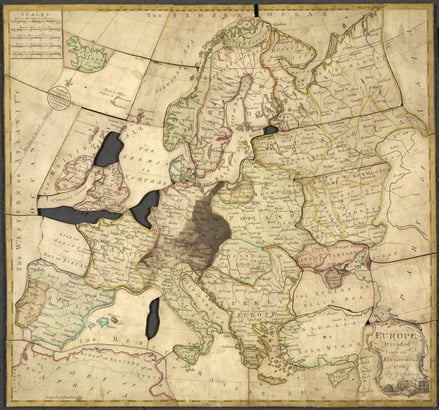 Europe divided into its kingdoms, etc. by John Spilsbury, which is believed to be the first purpose-made jigsaw puzzle.

The first modern iteration of the jigsaw puzzle was created by John Spilsbury in 1767. Spilsbury, a map-maker who pasted maps onto wooden blocks and carved out countries, originally created it as an educational tool for children learning geography. These early puzzles were sometimes called “dissections” but later became known as jigsaw puzzles as they were rendered and then cut with a jigsaw.

What began as wooden-blocks evolved into intricately carved wooden pieces around the 1880s. These early iterations of the jigsaw puzzle were often relegated to the rich because of their costly production process. Game purveyors such at Parker Brothers and Milton Bradley saw an opportunity to make the game more accessible to the masses and began manufacturing die-cut puzzles made with alternate materials such as cardboard; effectively gaining immense popularity at the onset of the 20th century and beyond.

During the Great Depression, economically friendly sources of entertainment like jigsaw puzzles and board games like Monopoly–ironically a game about making money–provided inherent satisfaction and cheap entertainment to Americans when job loss and concurrent belt-tightening became a way of life. With as many as ten million sold per week in 1932, puzzles were rented, created, and shared to pass time and get through the difficult days. Fast forward a few decades to 2020, and puzzle purveyors are seeing another dramatic spike in popularity.

The images printed on jigsaw puzzles historically range from bucolic imagery of the natural world to optical illusions and everything in between. Contemporary jigsaw puzzles vary in size and subject matter, but with more advanced printing techniques they often feature high quality reproductions of artworks in a bold range of colors.

Puzzles have the power to spark joy.

Puzzles have the power to spark joy and provide us with a sense of accomplishment and amusement while giving order to the chaos and stress of modern life. Indiewalls saw the need for non-digital distractions during the pandemic and answered by working with artists in their existing network to create this line of puzzles and games designed by independent artists such as Melissa Koby, Adam Fu, Ashley Mary, and more. “The heightened level of uncertainty around the pandemic had lowered a bit by the summer, and we had all accepted we had to stay home and find ways to entertain ourselves there” said Laura Gutierrez, Project Manager of Special Projects at Indiewalls who helped spearhead Sitting Pretty Games. These beautifully crafted games provide a creative outlet and a much needed break from endless scrolling. Partnering with Artist and Creative Director Mike Perry, Sitting Pretty has created a series of graphic puzzles that marry the healing power of art with the meditative act of puzzling.

You can view more puzzles and games by Sitting Pretty here.