Artist James Penfield is a Minnesota native currently living in Minneapolis. His painting combines ideas of photography, design, and nature in a way that analyzes our rapidly changing environment - both technologically and physically. Some of his noted collaborations include Vice Magazine, Converse, MN Vikings LLC, and the Denver Children’s Hospital. He’s also represented by Gallery Mar in Park City, UT.

Hey James, great to catch up. Can you tell us a little about yourself and your art.

I was that kid that made art since he was born (before birth I’ve heard) and the art guy in high school we all knew. I’m predominantly a painter, but over the past 3 years I’ve been focusing  on mixing photography, design, and painting  in order to touch on the environment and change.

We’re living in a time where discussing technologies to colonize a new planet is commonplace while simultaneously dealing with methods for saving this planet when it’s rapidly changing. These realities have greatly influenced how I interpret landscape. I used to approach landscape from a smaller, almost ad based character, now I see larger patterns and a structure system that's bigger than us individually.

You can see that progression in your work. Do you have any specific influences that drive your art practice?

I really love the experience of getting to know and living in a new city. There’s a book called “Invisible Cities” by Italo Calvino that explains that better than I can.

Music is also huge for me. Sometimes I’ll hear a sound in a song or something from a band like Polica, (which really happened and turned into an album cover for another musician) that puts an image into my head and I take it from there.

Those moments are important. I advise young artists to not always question or guess their direction. Things tend to “pop out” to you when you should pay attention to them. Or, equally valid, you can smash that compass and create a new one, all the same in process.

That’s a good way to look at the creative process. Do you have any other thoughts for emerging creatives?

To anyone starting out, don’t stop. Number 1 rule all time, work hard, and see the direct effect unfold. It's like a science. Things are a lot more simple than they seem. One of the best pieces of advice I’ve received from a teacher and fellow artist, was to incorporate your art practice into your daily routine and to not make it a separate event.

For me it's about reaching that place, but also knowing that it's just one of many. Like the idea of reaching a plateau, just to see another plateau, etc. etc. I think it was Braque who said that “limitation of means determines style, engenders new forms, and gives impulse to creation… extension, on the contrary, leads the arts to decadence.”

That idea of having limits, but understanding that they change also seems applicable to our globalized world.

Yeah, the internet allows for more reach and mobility. I started out showing work by finding flyers with calls for art, or through real concrete connections, like a friend knows a gallery owner, and you just went there because you were invited to show. Very different ballgame now.

Proximity is almost erased and it’s an open field, but in a mutually beneficial way, which I support always. I like to travel around, shoot photos of things that stand out to me, and now I can place work based off these trips in local galleries, as well as galleries in states I often travel to. It’s sort of a full circle system, or a cycle that can be repeated wherever you like. It’s the idea of following what you love, and everything follows which I think applies to everyone.

Your creativity extends beyond just painting. Do you have other pursuits?

Outside of my fine artwork, I work as a designer and I’ve been able to play illustrator which allowed me to create a “How to Draw” published book series. I love to explore the angles of art and see where it can take me, geographically and personally.

Music branding remains one of the highest regarded project types for me. I love playing music myself and have found a lot of community through that as well. There is a great community of artists and musicians in the Twin Cities that is unrivaled. It’s a true diamond in the rough and after living around the country here and there since I was 18, I find myself with a new appreciation and awareness of how that works here.

I also have a few favorite art sites that never cease to shake my creativity: DIA: Beacon, Tate Modern, MIA in Minneapolis and all the galleries in San Francisco in the early 2000’s.

Creativity knows no bounds. Any final thoughts or fun studio moments to share?

Sometimes I’m unaware that I’m holding onto things, like brushes, paper towels, erasers, while creating. To me it’s  a sign that I’m “in the right place.” Side note (this is weird) but when I find myself  dropping my brush while painting, it seems to be a sign of a good painting! Also, explore what you are, make a lot of mistakes and wrong turns to know your landscape and travel often! 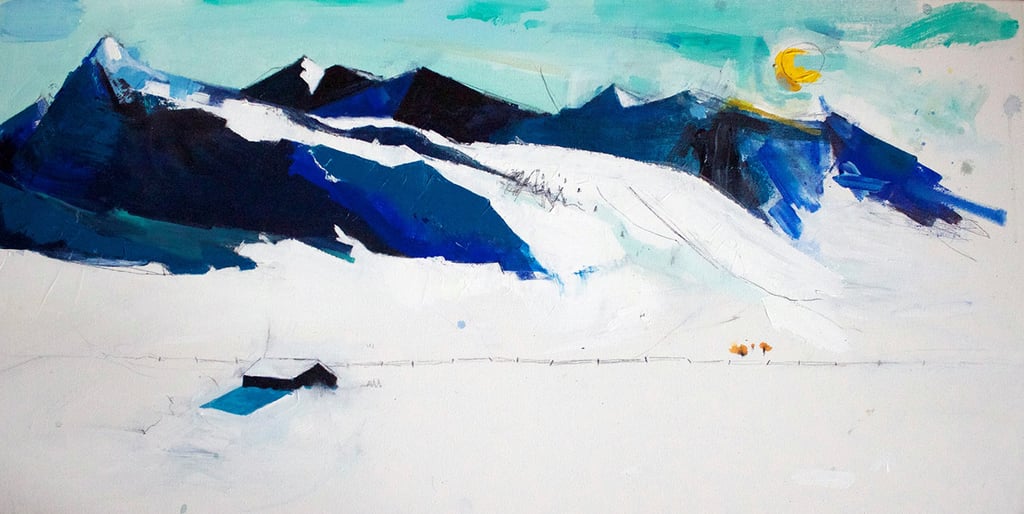