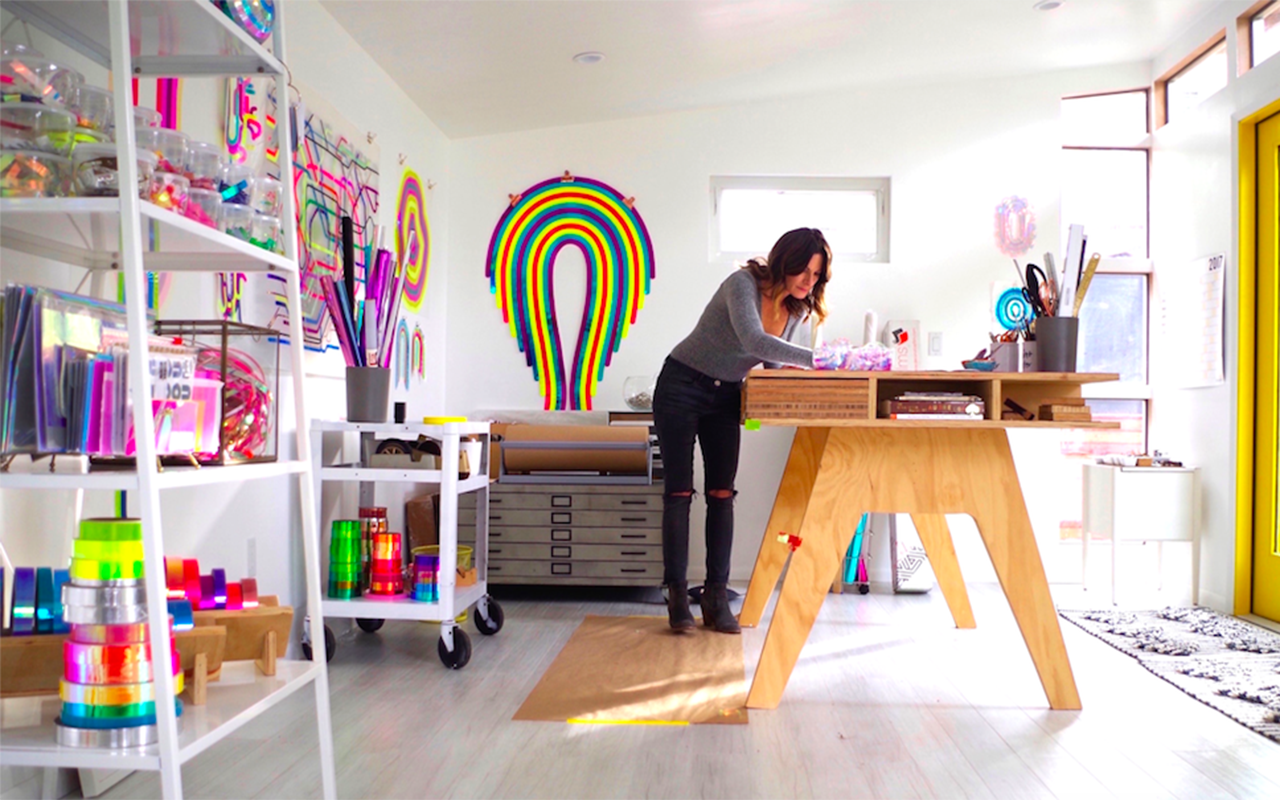 Artist, mom, city girl living in a small beach town in Southern California, book lover, and wife of a French scientist/super jock. These are just a few words that describe Cheryl Sorg, a multi-media visual artist originally from Cincinnati, Ohio. From childhood aspirations of becoming a fashion designer to receiving her B.F.A with honors in photography from the Massachusetts College of Art in Boston. Below she talks about making art that is truly multi-layered, the global issues of today which inspire her to create, and which three books shaped her life the most. 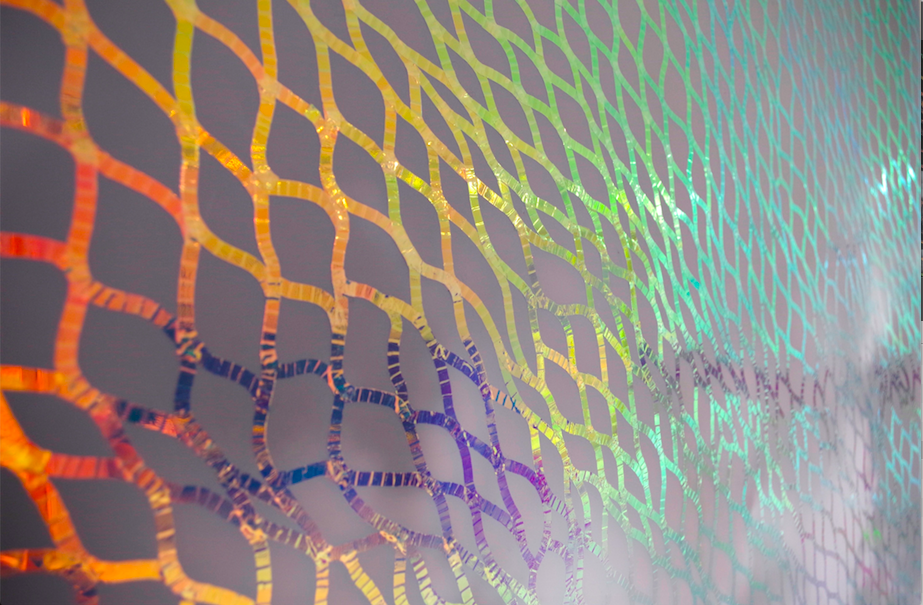 From the series 'Beautiful Net' - inspired by this quote from the Netflix series The OA: "The biggest mistake I made was thinking that if I cast a beautiful net, I would catch only beautiful things".

Tell us a little about yourself and your art.

I fell in love with photography in my twenties. But over the years, I started to set the camera aside and focused on making large scale book/text constructions. About six years ago, inspired by my love of books, I began experimenting with ‘portraits’ of people that involved enlarging their inked thumbprint and re-creating the pattern in bits of imagery, color, and text from the covers of the subject’s favorite books. I still do those, but most of my time these days is spent on exploring various ways to use shiny, colorful, metallic, and iridescent tapes (hula hoop tape!) and opalescent / color changing dichroic film, which I basically make into tape by cutting into narrow strips. There's just something about this tape - it seems to satisfy a need I had, in the face of ugly news and a misbehaving brain, for color, shine, and fun.

I create my work anywhere and everywhere. But now, as of just a couple of weeks ago, I work in the dream space, a large Studio Shed I just built in my backyard. It is grey (my favorite color), modern, with bright yellow french doors and tons of windows, streaming in tons of sun and natural light.

From the series - 'Beautiful Net'.

What advice would you give new artists just starting out?

What influences you and your art?

I am influenced by countless things - inspiration comes from a million different places.

Storytelling - I am an avid reader and try to read across a broad spectrum of genres and subjects. I love stories told through  other mediums, such as podcasts, music, and broadway musicals. The story that most captures my imagination now is Hamilton. I saw the show twice in New York - an intensely emotional and thrilling experience - and have listened to the soundtrack countless times, still new moments, phrases, lyrics jump out at me. I feel so lucky to experience one of the most incredible works of art in human history.

People - I am also in awe of, and full of respect for, people who devote their lives to fighting for justice. One who is foremost in my mind right now is the attorney Bryan Stevenson, who founded the Equal Justice Initiative and fights tirelessly on matters of racial justice, mass incarceration, the death penalty and others. Another influence / hero is Carrie Fisher. Her openness and humor in dealing with her own mental illness (bipolar disorder) is so inspiring.

Obsession -  I am in great admiration of this term and those for whom ‘obsession’ and intense devotion, is such a key part of their creative work. Yoko Ono’s decades long career with the singular focus of the pursuit and promotion of peace, Philippe Petit’s realized obsession of wire-walking between the twin towers, Christo and Jean-Claude’s massive, labor intensive projects, and Van Gogh’s obsessive and intense nature in general….there are so many. 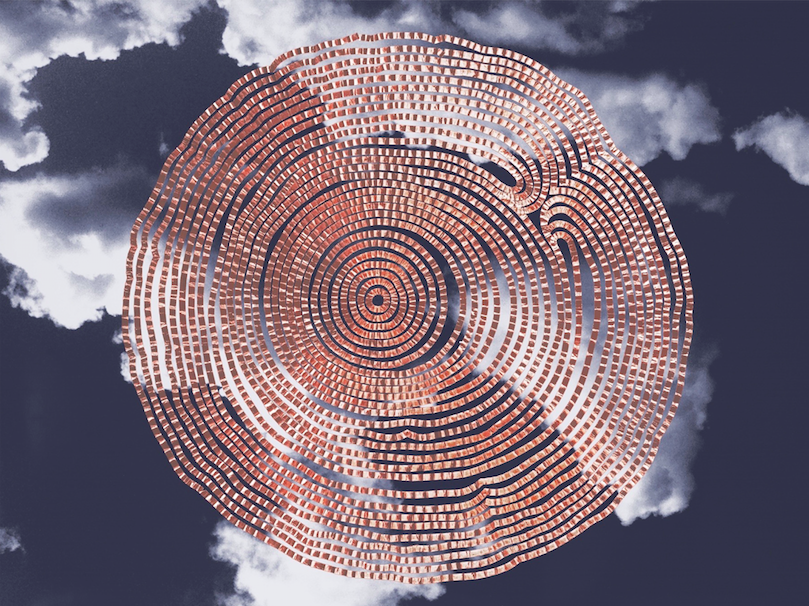 Walk us through your studio practice/creative process?

My work day starts with a bit of fresh air and food for the soul and mind. I take a walk with the dog, sit outside in the sun, drinking tea and spend time reading and sketching. If anyone is interested in a peek into my reading habits, you could check out the hashtag #mymorningreadinghour on Instagram.

In the studio, I work on pieces - tape ‘drawings’ of varying sizes. These works are constructed from a drawn or photographed template over which I lay a translucent engineering vellum. At least eighty percent of my work time is the actual ‘drawing’ of the piece in tape. The larger pieces are constructed from thousands of pieces of tape, cut into the tiniest of snippets in order to follow the bends and curves of the image smoothly. This is my favorite part of my work day. The process is incredibly repetitive - one might say tedious - and, as a result, something of a meditation. I have bipolar II disorder and the depression, irritability and downright bitchiness are all tamed by the long cycle of cutting and placing piece after piece (after piece after piece…) of tape.

What is currently your pipe dream project?

Do you have a favorite museum or gallery? Why?

While I am generally most drawn to contemporary art, my most moving art-viewing experiences have been in two museums that exhibit older works. The Metropolitan Museum of Art’s  court of European Sculpture and Decorative Arts is just an incredible space - the openness, the brilliant marble sculptures, the light...wow!  But my favorite is the Musée d’Orsday. Everyone knows that a reproduction can’t do a painting justice, but never has that been more evident to me than when I stood in front of Van Gogh’s self-portrait there. It was an intensely emotional experience, both times I’ve visited have been impossible to describe. 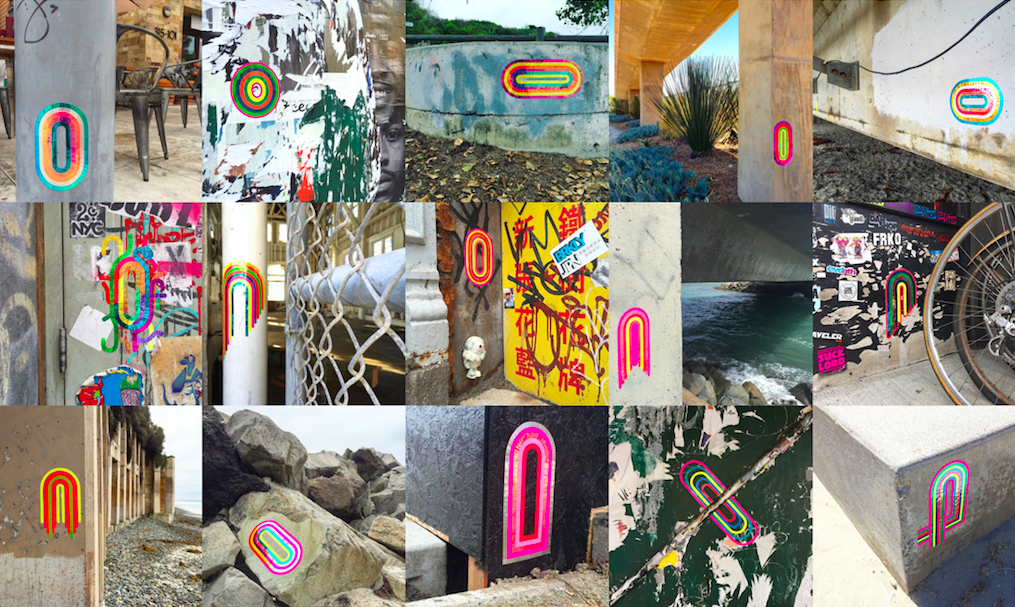 Grid of images from 'Portals of Hope' street art project.

What other creative pursuits interest you?

I’ve had many other things that I’ve become temporarily obsessed with - metal work & jewelry-making, writing, the study of literature, weaving - but nothing distracts for very long or sticks, as I really just love doing my primary work. I did get my degree in photography and I still love producing photographs. I love Instagram, and photography has been a big part of my ‘Portals of Hope’ street art project, in that I create documentation of the work by photographing the pieces out in the world. 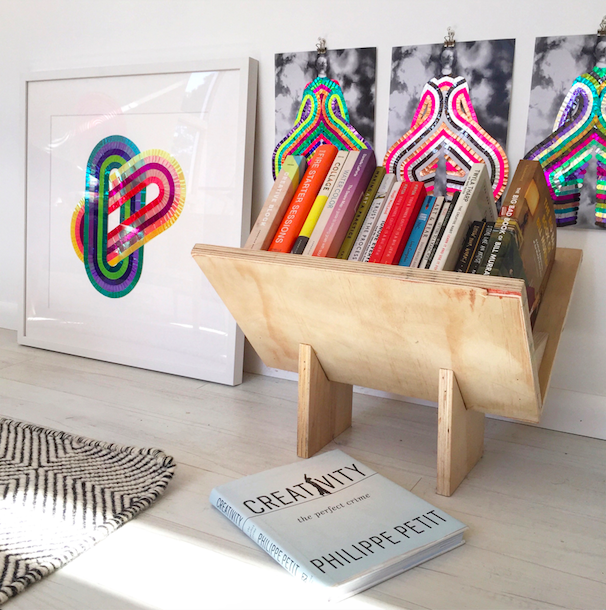 Sorg's books of inspiration and her 'Bowie' pieces in the background.

Name 3 books that changed your life?

Darkness Visible: A Memoir of Madness - by William Styron

As a person with mental illness, I am of course drawn to books by others who do as well. This one in particular sticks with me, and gave me the feeling of, YES, this is exactly what it feels like. It makes you feel a lot less alone when someone can put into words what feels impossible to put into words. I highly recommend this book to anyone who lives with and loves someone living with mental illness, especially depression.

The work of Borges is mind-bending, highly intellectual, unbelievably imaginative. I don’t pretend to understand everything he writes, but I love the way in which reading the works challenges and stretches the capacities of my brain. But what I love most about his work is how brilliantly it generates shapes, forms, images in my mind when I read it. It’s language, but it’s incredibly visual.

This book is irreverent, brilliant and so, so funny. I just love it. I imagine it is something I will re-read many times throughout my life. The distinct way in which it’s changed my life is through his idea of the ‘criminal practice’ and the myriad ways in which breaking the rules (or the law!) has been a part of his work. I had for a very long time wanted to create a public ‘street art’ body of work, but it is only after reading this book that it finally began. I anticipate and hope that the small ‘Portals of Hope’ pieces / project will morph into something larger and more ambitious.

*Naturally, at this particular moment in time, a number of sites revolving around real news and the fight on behalf of all those - Muslims, people of color, members of the LGBTQ community, immigrants, women, people in science and the arts, and more - whose lives will be (ARE, already) most impacted by Trump and his policies are at the forefront. Some of my favorites are Dan Rather’s newsandgutsmedia.com, Bryan Stevenson’s Equal Justice Initiative’s website eji.org, the Facebook feeds of Bernie Sanders, Rebecca Solnit and California’s newest senator Kamala Harris. I can’t wait to see what Barack and Michelle Obama do post-White House, and so I will definitely be watching obama.org as well. On the creativity front, I love brainpickings.org and thejealouscurator.com. 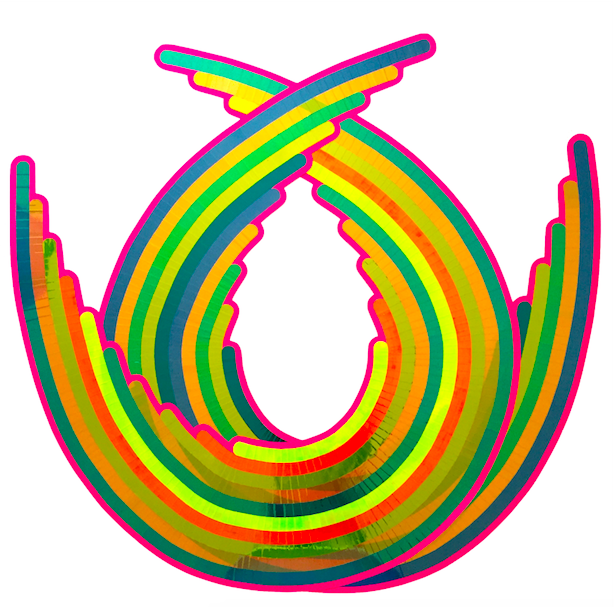